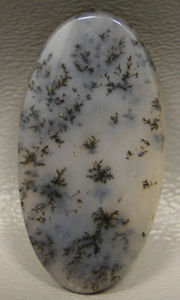 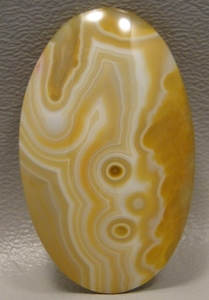 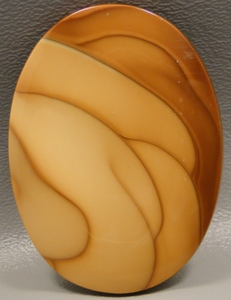 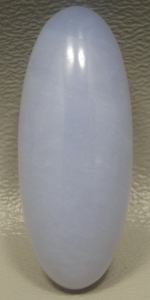 Chalcedony is a variety of Quartz stones that includes both jaspers and agates.

Chalcedony (kal SED' nee) is any form of cryptocrystalline quartz , where the crystals are too small to be seen without high magnification.

Quartz is one of the most abundant minerals on earth. It is found on every continent, and every country.  It too, is found in every country. Chalcedony stone forms in rounded crusts, rinds or stalactites in both volcanic and sedimentary rocks. The name can only be traced to the early sixteenth century and probably comes from "Chalcedon", an ancient port city on the Sea of Marmara in modern-day Turkey. Chalcedonies usually have a waxy luster and a hardness of 6.5 to 7. Chalcedony semi precious stones are tough cabochons, good for all jewelry uses and require no special care in wearing or cleaning.

In the rock world usually only the translucent or transparent, single color types are sold under the name "chalcedony cabochon".

Blue Chalcedony is probably the best known, but other colors are white, purple, yellow, and orange. Chrysophrase is a lovely apple green color and the blood red variety is simply known by the name Carnelian. There is an extremely rare pink to raspberry colored stone from South Africa known as Bustamite. The various types differ in color due to metallic impurities, such as iron, nickel, copper, and titanium present during crystallization.

The rest of the stones in the chalcedony family are sold under individual variety names.

(Flint, Sard, etc.), or as jasper cabochons or agate cabochons.

While the definitions overlap, Jasper usually refers to an opaque semi precious gemstone (no light comes through), with a solid color or an irregular display of colors caused by various mineral impurities. The name Jasper is derived from the Greek word that means “spotted stone”.

Agate is defined by its translucency (ability to see light through it), and by its clearly defined pattern or banding (stripes) of multiple colors. The name Agate is derived from the Sicilian river, Achates, where the material was first found in quantity.

Sometimes the distinction is blurred. Fire Agate is neither translucent, nor banded. And sometimes people just refer to a stone as a Jasp-Agate.

Jasper stones and Agate stones are found all over the world, with certain colors or patterns unique to particular localities. They are generally named after their locality (Montana Agate, Botswana Agate, Deschutes Jasper), or their appearance (Dalmatian Jasper-white with black spots, Poppy Jasper-yellow spots or "poppies", Crazy Lace Agate). All types of jasper cabochons and agate cabochons take an excellent polish, are trouble free to care for, and hardy enough for all jewelry uses.

Petrified Wood and Dinosaur Bone are chalcedony pseudomorphs, the replacement of one mineral (wood or bone) for another (chalcedony) without changing the original mineral's external appearance-even the most minute details of the wood or bone are preserved! In the Petrified Forest in Arizona, there are remains of an entire ancient forest that was transformed into chalcedony. Some logs as long as 213 feet have been found!

Most Chalcedony varieties are rich with history and lore. Agate was one of the first known minerals, and legends say the wearer of a agate cabochons would be agreeable and persuasive, and wearing an agate would assure him victory. The Sumerians, the earliest inhabitants of Mesopotamia, are believed to be the first user of agates in seals, beads, and jewelry. In ancient times agate was often carved into bowls. In Vienna there is a bowl measuring 28.5 inches across that was believed to be carried to Europe by the Crusaders.