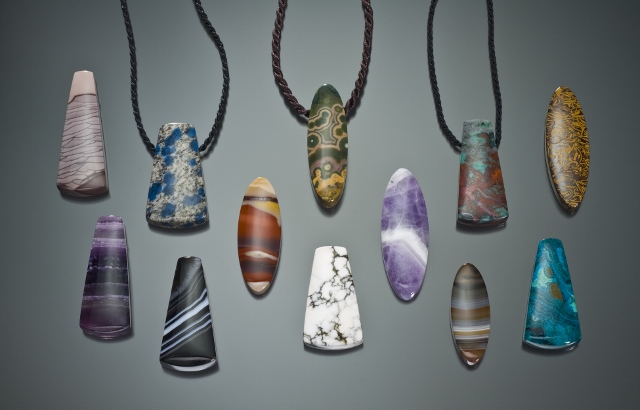 At Barlows Gems we have specialized in these beautiful stone bead pendants and stone cabochons for over 30 years.

A Bead is a small object that is formed in a variety of shapes and sizes from such materials as glass, plastic, wood, or gemstone, and it is drilled with a hole for threading or stringing.

A Focal Point Bead is a larger, really nice or high grade bead, designed specifically to be the center of attention.

A Focal Point Bead can be either by itself or in the center of a necklace, lamp, or bead creation, so it is the focal point (where the eyes should be drawn to).

Beads are one of the oldest forms of art. It is believed that semi-precious stone beads have been around for more than 50,000 years. Beads are some of the most common archaeological finds. From ancient time they have been used as adornment, in ceremonies, and as currency.

Archaeologists and bead historians believe that beads have been around for 50-100,000 years. A pair of Nassarius sea snail shells beads, found in Israel and approximately 100,000 years old, are thought to be the earliest known examples of jewelry.

In the Stone Age, beads were most commonly used for bodily adornment, and were made of natural materials such as eggshell, carved stone, bones, amber, ivory, horn, tusks, wood, shell, nuts, seeds, and other plant or animal matter. In ancient times people used them in important ceremonies. They made them from plant seeds, small freshwater pearls, coral, wood, clay, and other natural materials.

Romans, Saxons, Africans, and Native North Americans have invented and created large amounts of glass beads, gemstone beads, and metal beads. The earliest examples of African beads are disk-shaped beads made from ostrich eggshells; these date to around 10,000 B.C. and have been recovered from archaeological sites in Libya and Sudan.

India and its surrounding countries, with its abundant supply of precious and semiprecious stones, is one of the world's oldest gemstone bead making regions. Sophisticated drilled stone bead making in this region may have originated in 7000 B.C., and continues to this day. India, as well as Pakistan, Bangladesh, Nepal, and Sri Lanka also yield exceptional lampwork glass beads and foil beads.

Ancient China has been credited for the development of cloisonné, porcelain beads, and enamel beads. China is probably the largest bead making area in modern times. The Far East has been known for its use of jades, ceramics, and fine glass beads. And the long history of beads in Japan may have begun in 10,000 B.C. Magatama are prehistoric comma shaped beads found in Japan. They were originally made from primitive stone and used for adornment, but then became almost exclusively jade and used in ceremonies and as religious objects. Both Japan and Egypt practiced the custom of entombing the dead with great quantities of beads and other jewels. Beads were found in King Tutankhamen’s tomb in Egypt and in the Shoso Temple in Nara, Japan there are beads dating back to the 9th Century.

In the New World, the Incas of Peru and Colombia were sophisticated silversmiths and goldsmiths. The Aztecs and Maya were known not only for exotic gold and silver jewelry, but also for exquisite rock-crystal and jade jewelry. In modern Mexico, beads are made of clay, glass, gemstones, coral, amber, and shells. In North America many beads were made of shell. These beads were known as Wampum. Wampum were kept on strings and used as money.

Czech glass beads are made in the Czech Republic. Production of glass beads in the area dates back to the 14th century, though production was depressed under communist rule.

The Greek culture invented the worry beads. Worry beads are used for relaxation, to pass the time, or to help overcome an addiction-like smoking.

And check out our Unstrung Bead Strands and smaller Single Beads.