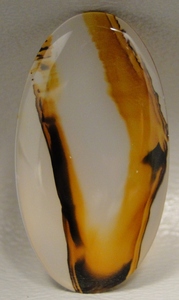 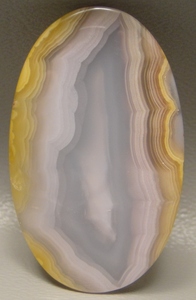 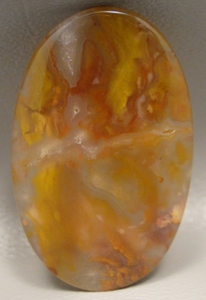 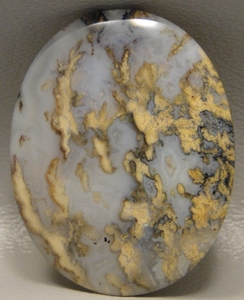 Agate Cabochons are a member of the Chalcedony family of semi precious gemstones.

Chalcedony (kal SED' nee) is any form of microcrystalline quartz, where the crystals are too small to be seen without high magnification.

However, in the rock world, only the translucent or transparent, single color types are sold as "chalcedony". Most of the other stones fall under the agate or jasper category.

Agates tend to have a more fibrous texture, where jaspers and flints tend to be more granular.

Also Agate is defined by its translucency (ability to see light through it), and by its clearly defined pattern or banding of multiple colors.  Jaspers are mainly opaque.

Agate is found in sedimentary, metamorphic or igneous rock.

But most Agates are igneous and were formed by volcanic activity.  Cavities formed in the magma by gas and air and over a long time silica rich solutions filled these cavities.

Agate was named from where it was first found - by the River Achates (now called the river Drillo) in Sicily.

As early as 3500 BC, the ancient Egyptians dug up amethyst, quartz, and Carnelians.  At the Weiselberg near Oberkirchen, Germany agates were mined as early as 1454.

Agates are found all over the world, with certain colors or patterns unique to particular localities. All Agate cabochons take an excellent polish, are trouble free to care for, and hardy enough for all jewelry uses.

In many traditions agate cabochons are believed to cure the stings of scorpions and the bites of snakes, soothe the mind, prevent contagion, quiet thunder and lightning, secure the favor of the powerful, and bring victory over enemies.

Agates in general are known for being lower intensity stones. They are considered stabilizing and strengthening influences.

Please check out all the cabochons we have by exploring our store. For more information on a specific type of agate cabochon, just go to that category.